Neymar emotional video message to the fans, after his World Cup injury 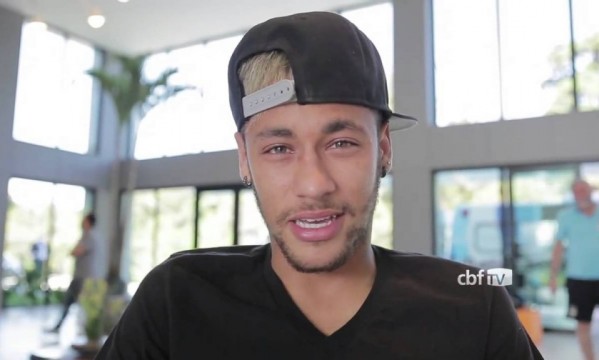 Brazil may have advanced into the World Cup semi-finals,Â but the whole nation couldn’t help but toÂ fallÂ in shock when they saw Neymar layed down on the ground, last Friday night in Fortaleza. The “Escrete” has beat Colombia by 2-1 in a very competitive game, but the FCÂ Barcelona star was forced to leave the pitch when he got hit with a hard knee on his lower back, around the 88th minute of the match. The Colombian defender responsible for this incident wasÂ Juan Zuniga from SSC Napoli, but Neymar didn’t seem to be holding any grudge against his professional colleague in an emotional video he left to the fans earlier this Saturday.

Neymar: “This is a very tough moment and I just seem to be unable to find the words that could really show what’s going on in my mind. However,Â IÂ just want to say that I’ll try be back the quick as possible. I also want to thank you for all the support and affection that youÂ keep showing me”, started by stating a visibly emotional Neymar.

Neymar: “My dream isn’t over yet though… It was interrupted by an unfortunate play, but it’s still very alive. I’m pretty sure my teammates will keep on doing everything in their reach to accomplish that dream, and which is obviouslyÂ to winÂ the FIFAÂ World Cup. I also had the dream of playing a World Cup final, but unfortunately that won’t be possible anymore. Nevertheless, I’m very confident we’ll go through in these semi-finals and go all the way to be champions. Not only me butÂ allÂ Brazilians willÂ be behind the team in great support, so thank you all again”, remarked the 22-year old star, with tears about to startÂ falling down his eyes.

Brazil will clash against Germany this next Tuesday,Â in the 2014 FIFA World first semi-finals. Neymar on the other hand, is set to miss the rest of the tournamentÂ as he’ll have to go through a 4 to 6 weeks recovery period before playing football again.

Neymar crying in his video message to the fans, after the FIFA World Cup 2014 injury