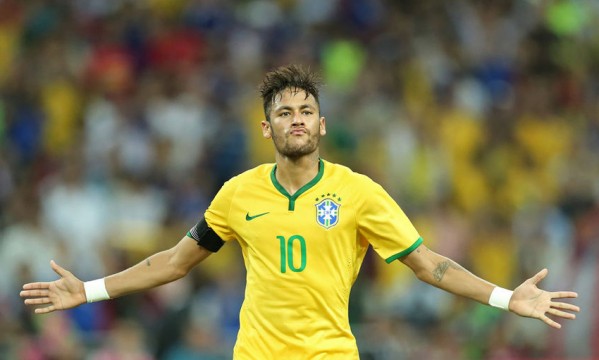 For the first time in his career, Neymar scored a poker of goals while playingÂ forÂ Brazil. The 22-year oldÂ led his nation to another win this Tuesday morning, as the “Escrete” ran over Japan in Singapore, with a clear 4-0 win…

The opener was scored around the 18th minute of the first half, after a great assist from DiegoÂ Tardelli allowed Neymar to go 1-on-1 with the Japanese goalkeeper. The 22-year old forward ran past the goallie with ease and then hitÂ the ball into the back of the net to put Brazil on the driving seat.

Half-time came in with Brazil preserving their 1-goal advantage, but it only took them 3 minutes after the break to extend the lead. Just like in the previous goal, Neymar found himself with only the goalkeeper in front of him and this time, instead of going around him he simply struck the ball past him with class. The assist was delivered byÂ Liverpool‘s midfielder, Philippe Coutinho, who had came in for Ă“scar at half-time.

The 3-0 arrived in the 77th minute, when a first shot by CoutinhoÂ ended up forcing Japan‘s goalkeeper to block it and send the ball bouncing a few meters in front, which allowed Neymar to react fast andÂ score from the rebound through a left-foot strike.Â The Barcelona superstar was visibly happy and celebrated hisÂ hat-trick by pretending he was playing basketball andÂ had just made a 3-point throw.

There was still one last goal left in this game and once again, it would beÂ Neymar striking the final blow for Brazil. The 22-year oldÂ forward finished off a great attacking play initiated by Robinho and KakĂˇ, heading a perfect cross from the former Real Madrid player andÂ establishing the final score in 4-0 to Brazil.Â With today’s poker, Neymar has now 40 goals in 58 appearances for Brazil,Â as he gets closer and closer to PelĂ©‘s 77-goal record (in 92 games). 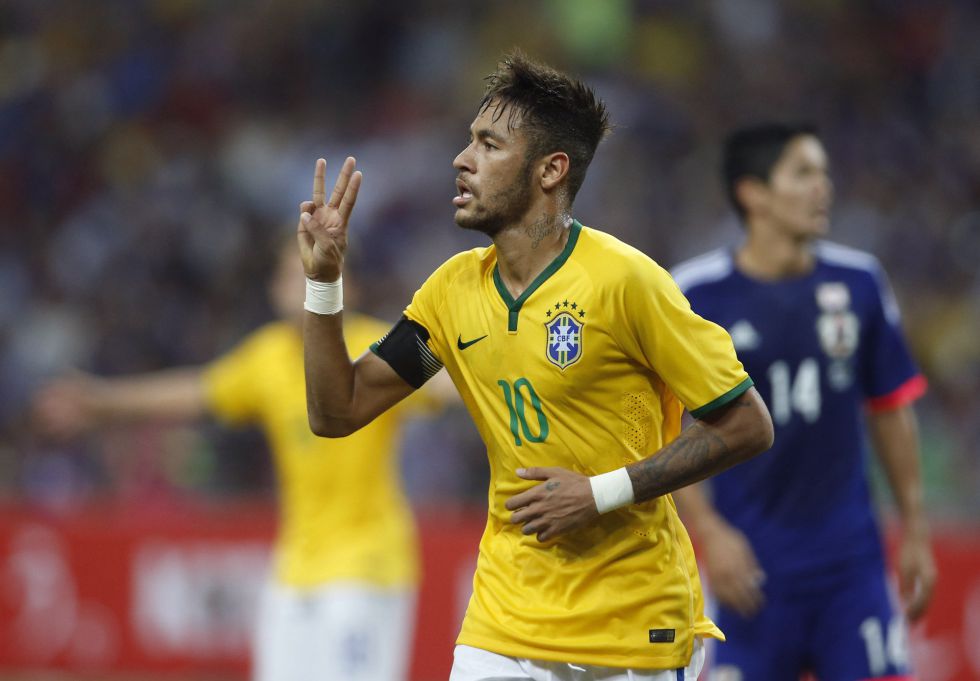 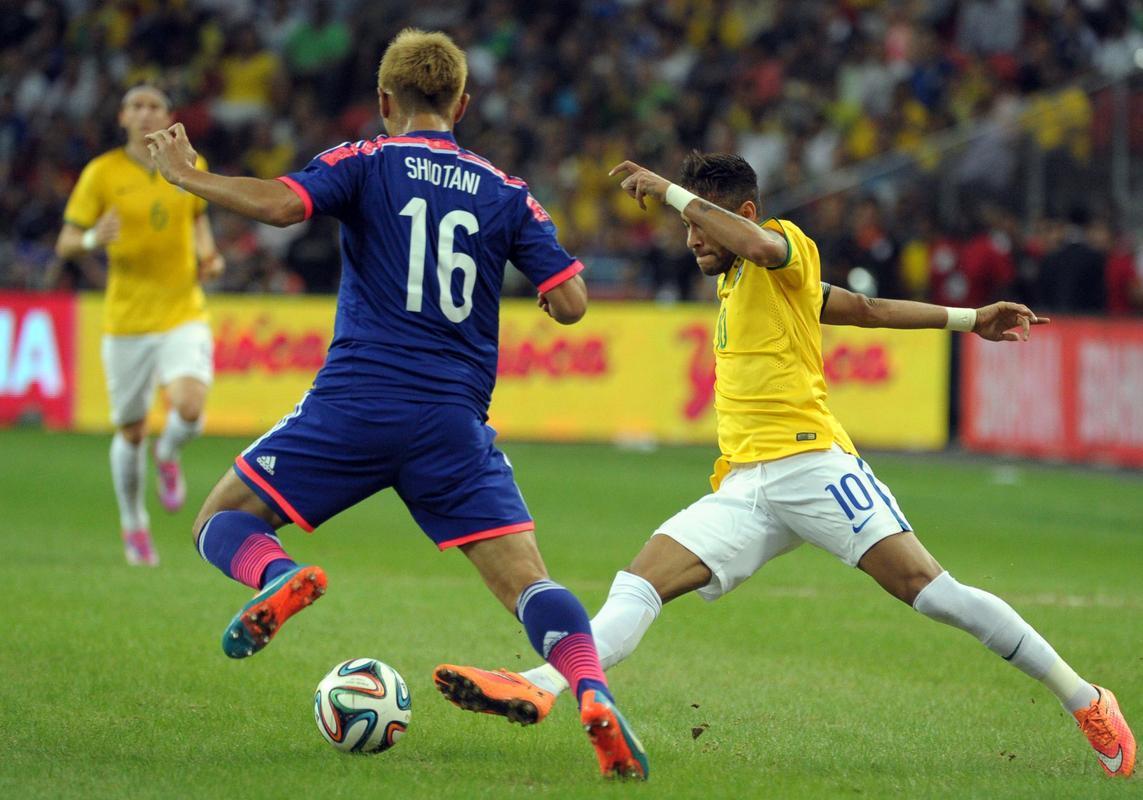 Neymar stretching his right leg to reach to the football 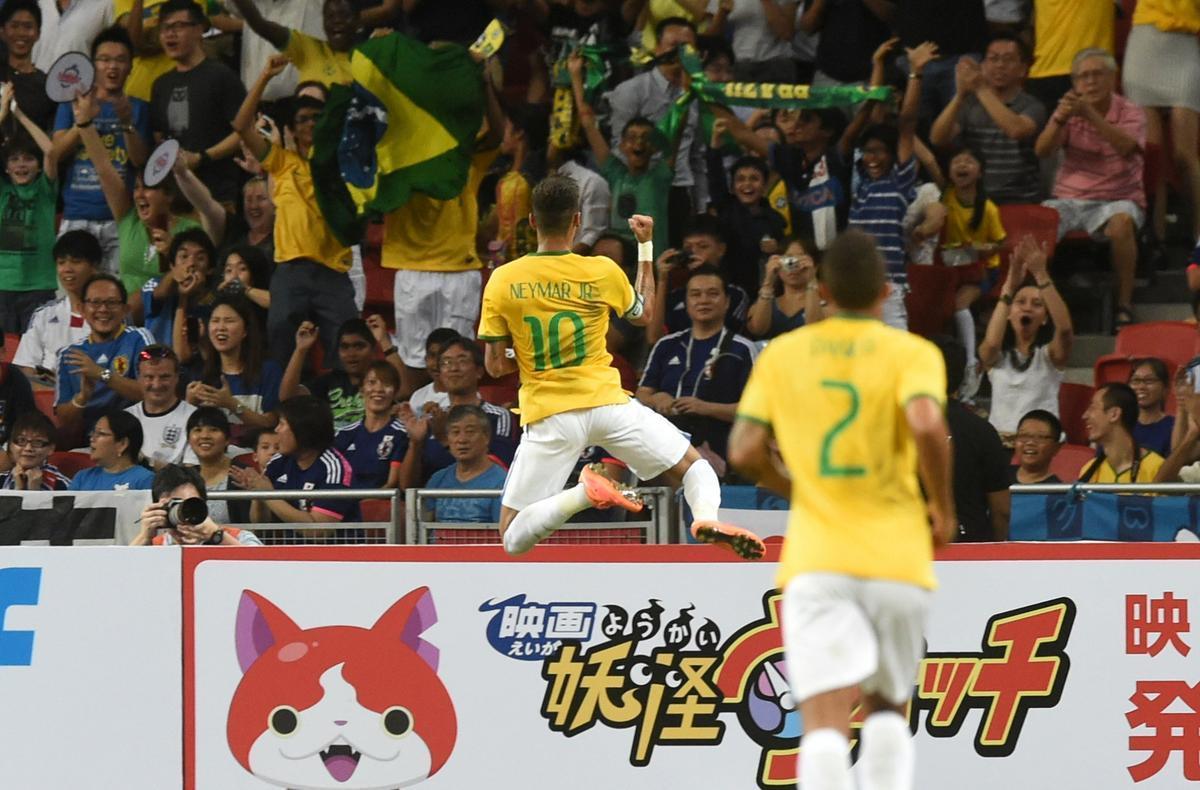 Neymar jumping towards the fans 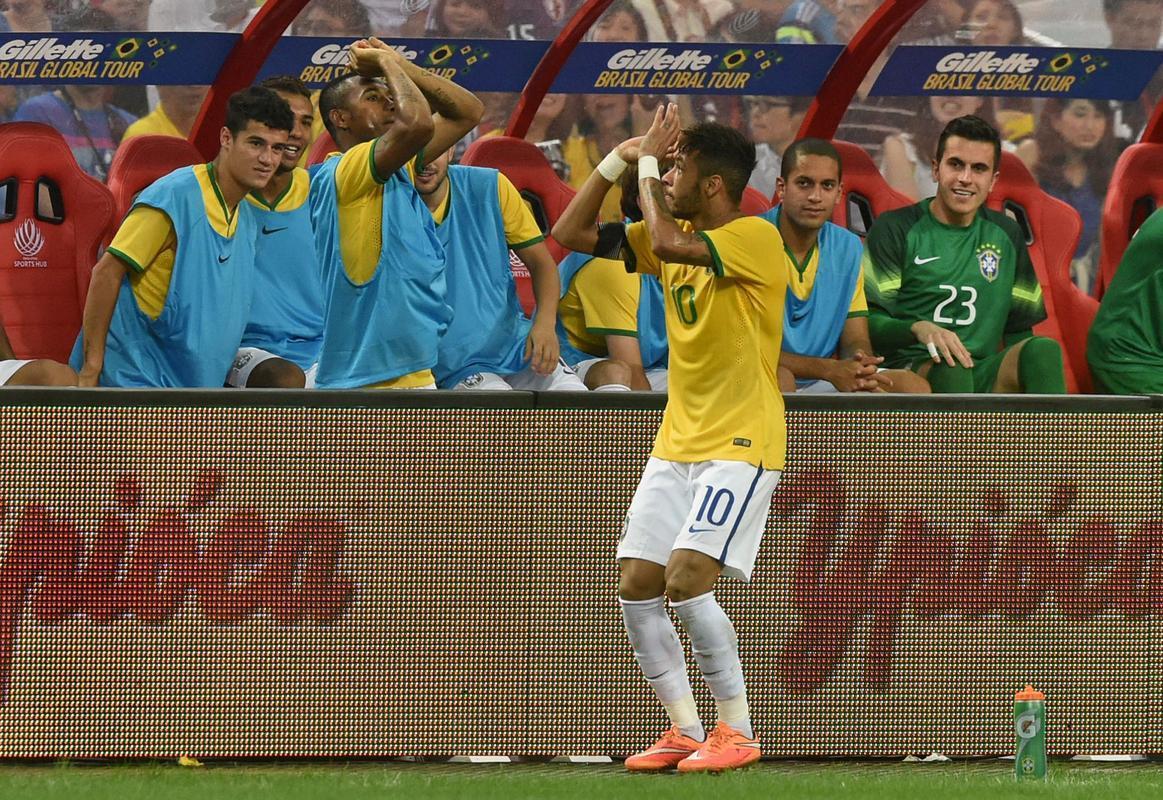 Neymar celebrating a goal with a 3-point basketball throw gesture 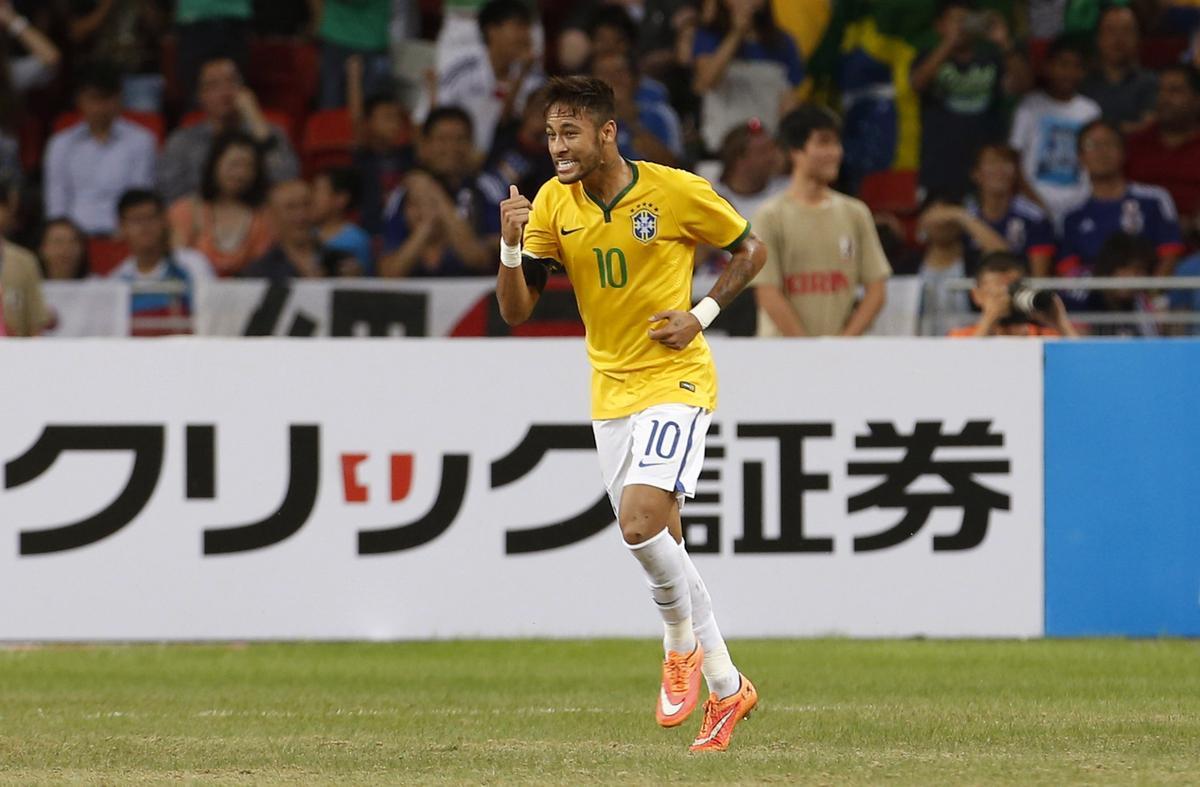 Neymar playing in Singapore, in Japan vs Brazil 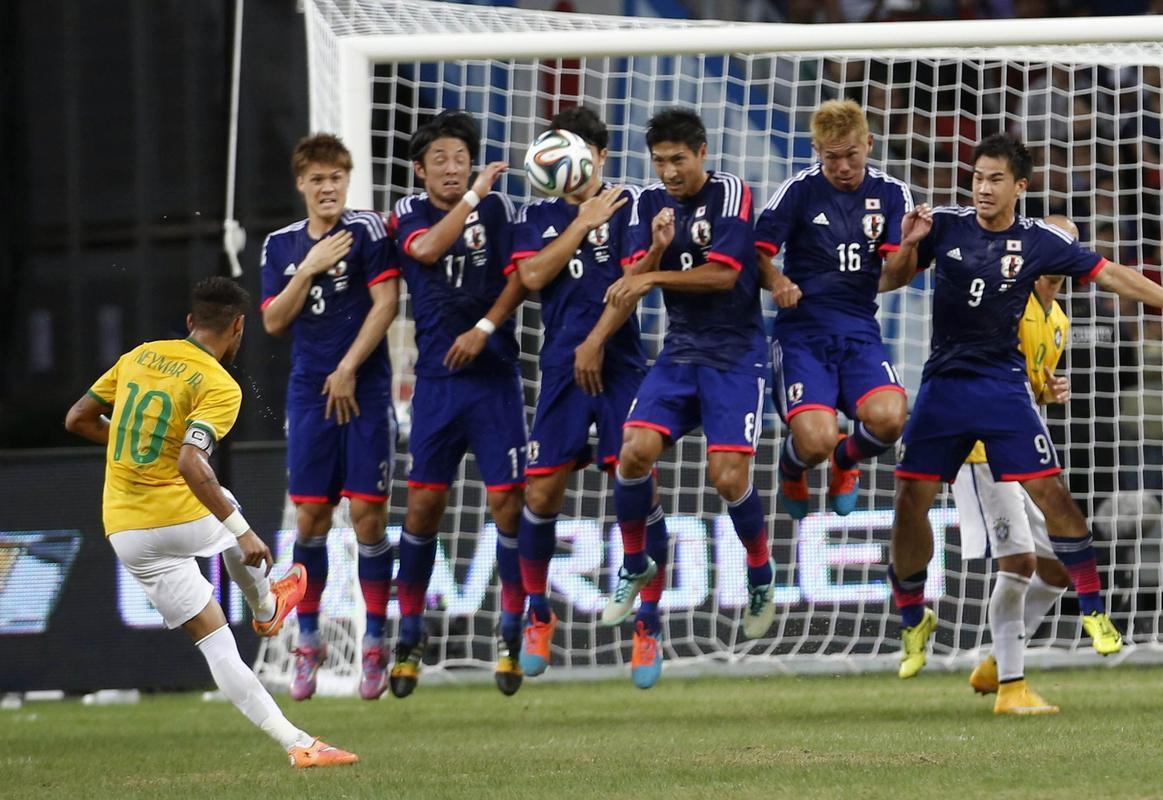 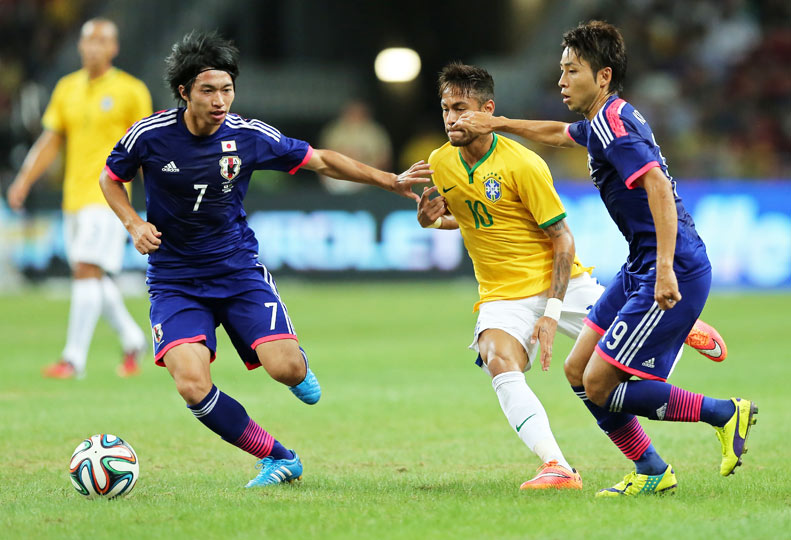 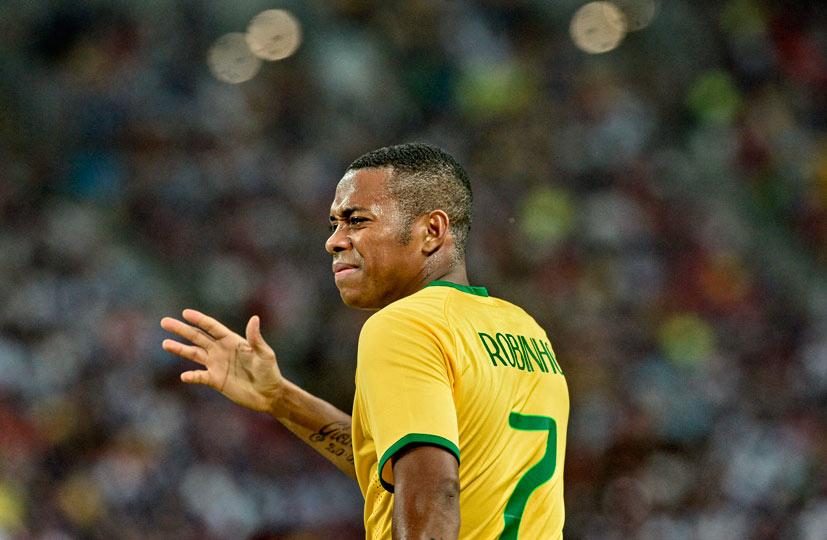 Robinho in the Brazilian National Team